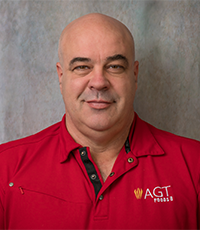 Board of Directors: Les Knudson

Les Knudson was raised on family farm near Crosby ND. The family also owned a manufacturing business building large tractors and other farm equipment. He Graduated from University of North Dakota in 1989 with a bachelor’s degree in Mechanical Engineering. He accepted a position with Ideal Aerosmith in East Grand Forks and worked as an Engineer and later as the sales manager. In 1994 he made the decision to move back to the family farm to raise a family. In 1996 he along with his father and brother started a business buying, processing and exporting peas, lentils and chickpea all over the world. Between 1996 and 2007 he and his family built three processing plants and built the business into one of the largest pea and lentil processors in the USA. In 2007 he sold the business to Saskcan Pulse (Now AGT Foods).  Between 2007 and 2012 he designed, and built facilities for AGT Foods in USA, Canada, Australia, and China. In 2012 he took on the roll of operations manager for USA in addition to building the Ingredient processing plant in Minot ND. Currently, Les oversees operations of the Minot facility and participates in product development, plant and process design. He resides in Crosby ND with his wife. They have three grown children.