4 Types of Robots Every Manufacturer Should Know

There is a lot of buzz these days in the manufacturing sector about robots — and how they can help manufacturers address some of the challenges they face in today’s market, such as increased productivity and the scarcity of skilled workers.

But what exactly do analysts and automation experts mean when they use the word “robot?” And how can different types of robots improve an actual manufacturing operation? If you are a smaller manufacturer who is curious about robots but has never worked with them, it may be difficult to envision how robots might fit in to your facility. Here’s an overview of four types of industrial robots that every manufacturer should know. 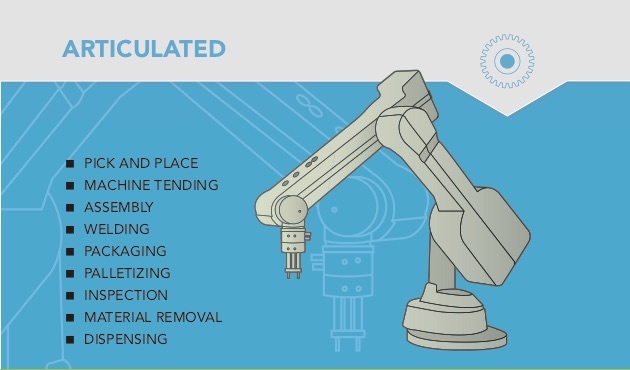 An articulated robot is the type of robot that comes to mind when most people think about robots. Much like CNC mills, articulated robots are classified by the number of points of rotation or axes they have. The most common is the 6-axis articulated robot. There are also 4- and 7-axis units on the market.

Flexibility, dexterity, and reach make articulated robots ideally suited for tasks that span non-parallel planes, such as machine tending. Articulated robots can also easily reach into a machine tool compartment and under obstructions to gain access to a workpiece (or even around an obstruction, in the case of a 7-axis robot).

Sealed joints and protective sleeves allow articulated robots to excel in clean and dirty environments alike. The potential for mounting an articulated robot on any surface (e.g., a ceiling, a sliding rail) accommodates a wide range of working options.

The sophistication of an articulated robot comes with a higher cost compared to other robot types with similar payloads. And articulated robots are less suited than other types of robots for very high-speed applications due to their more complex kinematics and relatively higher component mass. 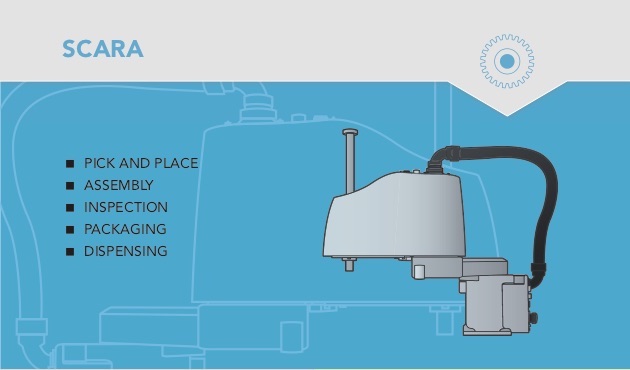 A Selective Compliance Articulated Robot Arm (SCARA) is a good — and cost-effective — choice for performing operations between two parallel planes (e.g., transferring parts from a tray to a conveyor). SCARA robots excel at vertical assembly tasks such as inserting pins without binding due to their vertical rigidity.

SCARA robots are lightweight and have small footprints, making them ideal for applications in crowded spaces. They are also capable of very fast cycle times.

Due to their fixed swing arm design, which is an advantage in certain applications, SCARA robots face limitations when it comes to tasks that require working around or reaching inside objects such as fixtures, jigs, or machine tools within a work cell. 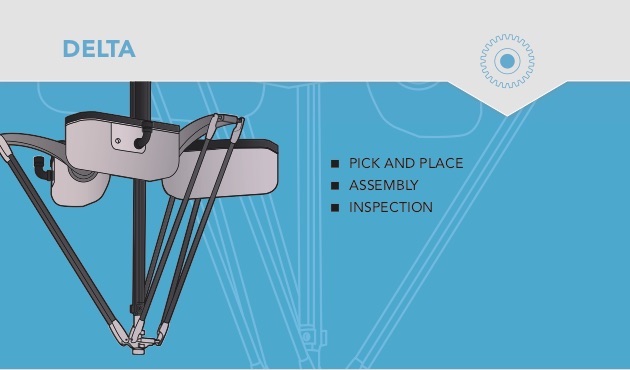 Delta robots, also referred to as “spider robots,” use three base-mounted motors to actuate control arms that position the wrist. Basic delta robots are 3-axis units but 4- and 6-axis models are also available.

By mounting the actuators on, or very close to, the stationary base instead of at each joint (as in the case of an articulated robot), a delta robot’s arm can be very lightweight. This allows for rapid movement which makes delta robots ideal for very high-speed operations involving light loads.

An important thing to note as you compare delta robots to other robot types: Reach for delta robots is typically defined by the diameter of the working range, as opposed to the radius from the base, as in the case of articulated and SCARA units. For example, a delta robot with a 40” reach would only have half the reach (20” on a radius) of a 40” articulated or SCARA unit. 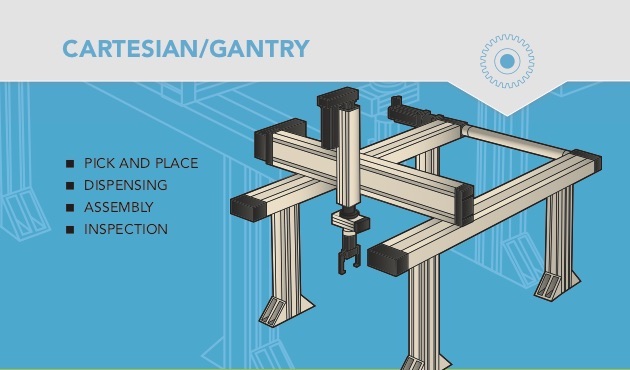 Cartesian robots typically consist of three or more linear actuators assembled to fit a particular application. Positioned above a workspace, cartesian robots can be elevated to maximize floor space and accommodate a wide range of workpiece sizes. (When placed on an elevated structure suspended over two parallel rails, cartesian robots are referred to as “gantry robots.”)

Cartesian robots typically use standard linear actuators and mounting brackets, minimizing the cost and complexity of any “custom” cartesian system. Higher capacity units can also be integrated with other robots (such as articulated robots) as “end- effectors” to increase system capabilities. That said, the custom nature of cartesian robots can make design, specification, and programming challenging or out of reach for smaller manufacturers intent on a “DIY” approach to robotics implementation.

Cartesian robots are unable to reach into or around obstacles easily. And their exposed sliding mechanisms make them less suited for dusty/dirty environments.

Whether you’re tackling implementation yourself or working with a reputable systems integrator, knowing the different types of robots available will help you select the best machine. Knowing a little bit about the capabilities and costs associated with different robot types is a crucial first step toward making an informed decision.

To learn more about the distinctions between different types of robots on the market, download the “Manufacturer’s Guide to Robotics” from MEP National Network representative Catalyst Connection (part of Pennsylvania MEP), which helps small and medium-sized manufacturers navigate technological transformation.