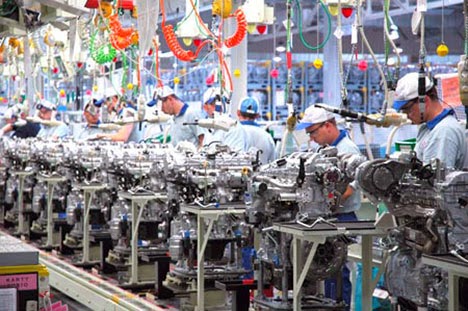 I just read an article by Norman Bodek, a consummate Lean thinker and arguably the “Godfather of Lean” in America. His focus was the fact that only 2% of Lean efforts are successful. To quote from his article,

“We in the West noticed Toyota's success and copied them; used their tools and attacked our wastes, but our problems are different. We might not make cars.

First state your real problems, identify your wastes, not Toyota's. Then work out the exact plan to eliminate those problems and then find the necessary tools and techniques to use.“

What I love about Norman is that he will challenge conventional wisdom, the status quo, with logic and reason and without batting an eye. In certain circles that is akin to blasphemy.

To illustrate this point, in preparation for one of Impact Dakota’s manufacturing conferences we had selected a keynote speaker of great notoriety in the Lean community. This gentleman had written a number of books specifically and exclusively about Toyota. In his books he does a very good job of describing Toyota’s approach and philosophies regarding people development, the culture, leadership, production, and so on. You’ll notice that I did not refer to them as Lean books. Lean is based on an accumulation of best practices, globally, and going as far back as Byzantine ship building, by some accounts. Major and relatively recent contributors include Piggly Wiggly and the Ford Motor Company, among others. So, kudos to Toyota and other world class organizations for paying attention to the fact that there is always a better way. But back to our point.

The night before the opening of the conference we took this gentleman out for dinner, and naturally the conversation settled on Lean and Toyota. I mentioned to him that during my prior employment at a major office systems furniture manufacturer that we had secured the services of Kiyoshi Suzaki, a management/manufacturing consultant and author of numerous best-practices books himself. With Mr. Suzaki’s guidance and coaching we saw significant improvements, and during our dinner conversation I described a specific example of note and how it completely reshaped our thinking about inventory management. Much to our surprise our guest speaker went off on a rant of how that could not possibly have worked because that is not how Toyota would have done it. Given a choice, I would have rescinded our invitation to him on the spot. Rather than label him as a Lean advocate I would more accurately describe him as a Toyota groupie, a literalist.

Prior to and shortly after World War II, Toyota had visited the Ford Motor Company, as well as the Chrysler Corporation and other related organizations, seeking technical assistance. Henry Ford was somewhat revered by the Japanese industrialists and his management and manufacturing philosophies were much sought after, especially by Toyota. In the 1950’s, a contingent of Japanese automakers, specifically, Toyota Motor Company and Kanto Auto Works, Ltd., arrived in the United States, the purposes of their trip were to observe the American automobile industry and to negotiate a technical tie-up agreement with Ford Motor Company. Toyota Managing Director, Eiji Toyoda, later wrote that one of his greatest takeaways from the training that he received at Ford was the value of, and necessity for state-of-the-art machine tools (for the time) for quality, high-volume production--something that Toyota lacked at the time. However, the training and close observation of the Ford production system and facilities resulted in another important conclusion for Toyota and their unique circumstances. Ford had too much space, too much material, too much WIP (work in process) for Toyota to emulate. So they formulated variations of the model to suit their unique circumstances. For Ford, at that time and under the current circumstances it was working just fine.

Here's the second point. What if Toyota’s infatuation with Ford led them to blindly emulate, to literally copy all of Ford’s practices at the time? In hindsight we know that if Ford, GM and Chrysler were experiencing the intense global competition then as they are today that maintaining some of those philosophies and practices would have relegated them to last place, if they would have survived at all. Ironically, Toyota’s constant refinement of best practices over the decades has led the big three auto makers to attempt to emulate the Toyota Production System, albeit with great difficulty. In short, an organization will never succeed by attempting to copy the Toyota Production System. First of all, you are not Toyota. Your evolution as an organization is different. Your culture is different. Your leadership styles are different. For the vast majority of you, your products and services are different. For the majority of manufacturers, 70 percent-plus are low-volume, high-mix producers whereas Toyota is high-volume, low mix—although they’re pretty good at providing the consumer with numerous options. The authors of the Toyota-based books should preface each books with,

Caution: The following information included in this book is for information purposes only. Although some of the concepts are universal, employ only those that will actually work for you and your unique circumstances. You are strongly encouraged to pursue innovation and ideas that will create your own unique value proposition, like Toyota did.

You are also strongly encouraged to read about how, and more importantly why Toyota did what they did. The real lesson is how and why they are in constant pursuit of excellence by promoting constant learning and adapting that knowledge to make improvements within their own unique conditions and circumstances. Toyota will be the first to admit that their principles, concepts and philosophies can actually be improved upon.