Where Manufacturing Is Growing (and Where It Is Not)

Over the past few years, I have written more than a few blogs and papers looking at manufacturing productivity across the 50 states. I wanted to update some of these analyses to reflect more recent data, see what it tells us and examine how states were performing when looking at the change in real manufacturing GDP since the Great Recession, but before the COVID-19 pandemic. After all, how do we know where we’re going if we don’t know where we’ve been?

The impacts of the COVID-19 pandemic will be difficult to predict or parse long term due to a number of variables, including sector, changes in demand and/or likelihood the manufacturer was deemed essential in the spring 2020 closures. However, despite these variables, we can safely assume that issues existing before the pandemic will still affect manufacturers during and after the pandemic.

We’ve heard this via a series of 11 listening sessions organized by the National Institute of Standards and Technology’s Hollings Manufacturing Extension Partnership (NIST MEP) called the “National Conversation with Manufacturers” series. The focus of the conversations is on learning how manufacturers are handling the near-term jolt from the pandemic and preparing for success in the long-term.

One theme that emerged at each session was that although controlling the virus looms large, none of the companies could report that their other problems had disappeared. In fact, their underlying problems remained mostly the same, and in a few places, the issues worsened because the pandemic put pressure on pre-existing soft spots. Understanding the existing landscape remains important; sometimes the more things change, the more they stay the same. Managing issues that existed before COVID-19 will be an important piece of recovery as well as in addressing the new challenges brought on by the pandemic.

One of the things that has caught the attention of economists is the slow growth in productivity since we emerged from the Great Recession. As the chart below suggests, productivity across the manufacturing sector has been relatively flat since a sharp increase as we emerged from the Great Recession. Since that sharp rebound, productivity has been relatively flat since about Q2 2010 until the COVID-19 recession, when real productivity across the manufacturing sector took a deep dive but is now showing some signs of rebounding.

This made me wonder what was behind the flat performance. I decided to look at what has been happening to real output (reflected as the numerator) in the productivity ratio (with the denominator representing hours). The chart below provided an “a-ha” moment in that real output has remained relatively flat since the economy emerged from the Great Recesssion and well below where it was previously.

That led me to wonder what was happening across the 50 states, and what follows is an analysis of how real output has changed across the country.

I divided the states into five groups. I sorted the data from highest growth to lowest and then grouped them on what appeared to be logical break points in the distribution using the “ocular comparison method” (I eyeballed the data). The first two groups of states performed better than the U.S. as a whole by 1.6%. Six states – Arkansas, California, Colorado, Georgia, Indiana and Massachusetts – in the third group grew at annual rates higher than the U.S. overall. In all, manufacturing GDP in 25 states grew faster than overall U.S. GDP during this period. 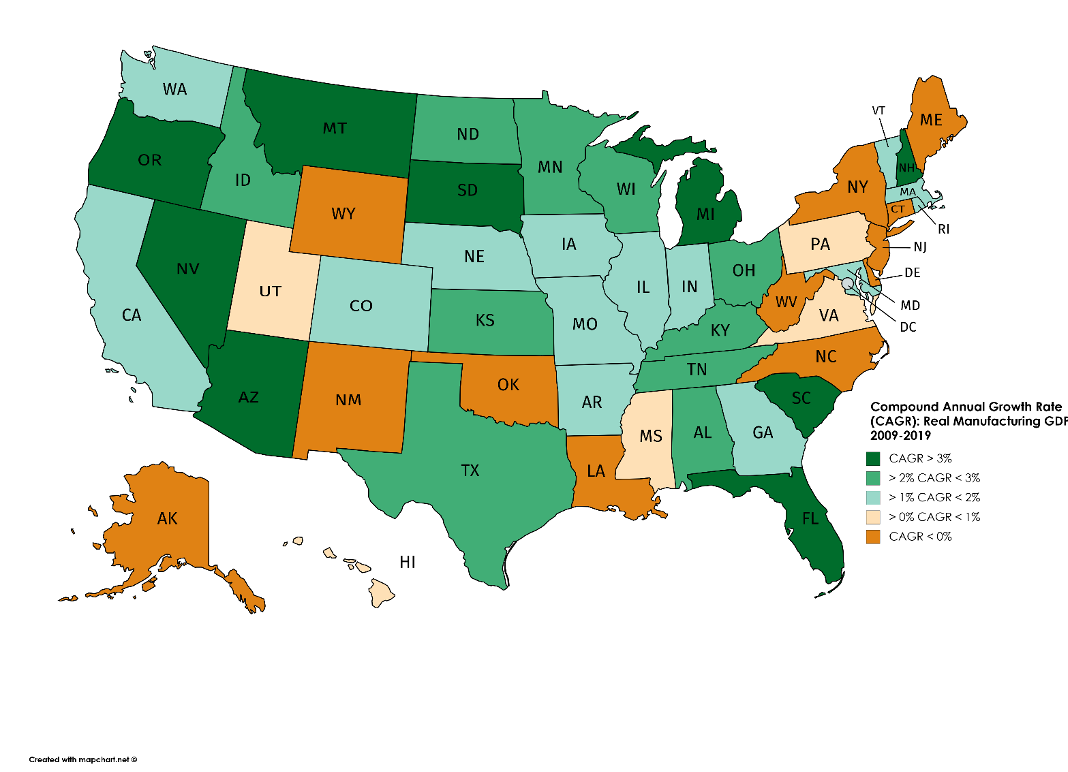 I was surprised at what I found. The differences across the 50 states were startling. For policymakers, they may need to think how their business climate effects differences in state economic performance. For instance, studies by the Center for Business and Economic Research at Ball State University and the 2020 State New Economy Index published by the Information Technology and Innovation Foundation may point a way forward. These data cast new light on different dimensions of productivity and manufacturing. As I have argued in previous blogs, manufacturing productivity is important, and as we continue to recover from the current crisis, productivity will be even more important to national, state and local economic and company competitiveness. Productivity is typically defined as the ratio between a measure of output and a measure of input (or multiple inputs) used to produce a good or service. Productivity provides a measure of how efficiently production inputs are used to produce or yield a certain level of output. As the BLS suggests in their "Productivity 101” lesson, productivity growth is the means to increase output without increasing inputs or incurring additional costs.

A 2017 McKinsey Global Institute Discussion Paper made clear that not all sources of productivity gains are the same. McKinsey highlights how productivity can be improved through efficiency gains – by reducing the amount of inputs to produce a given output – or by increasing the value or volume of output with the same level of inputs. Indeed, a 2014 paper by Acemoglu and his colleagues highlighted the importance of disaggregating manufacturing productivity into its constituent elements. They found that much of the subpar performance across manufacturing reflected declines in real output alongside declines in employment. I suspect we have spent a lot of time focusing on reducing the denominator in production and not enough time thinking about how to grow the numerator of items produced in the productivity equation.

For the MEP National NetworkTM, the path forward (in terms of improving productivity) may be helping companies grow their top line rather than shrinking the denominator. This could include helping companies with market intelligence to highlight growing segments of business and consumer demand as well as things such as growing exports, import substitution or reshoring opportunities. For instance, the recent 2020 State of Manufacturing survey conducted by Enterprise Minnesota found that nearly 60% of the manufacturers surveyed said finding new customers will be the primary driver of future financial growth. Next in line is maximizing productivity (27%), followed closely by developing new products (24%).

Recovering from an economic downturn is always a complex challenge and coming back from the impacts of COVID-19 is likely to be particularly so. However, we can use what we do know to help guide us as we try and chart a path through what we don’t.